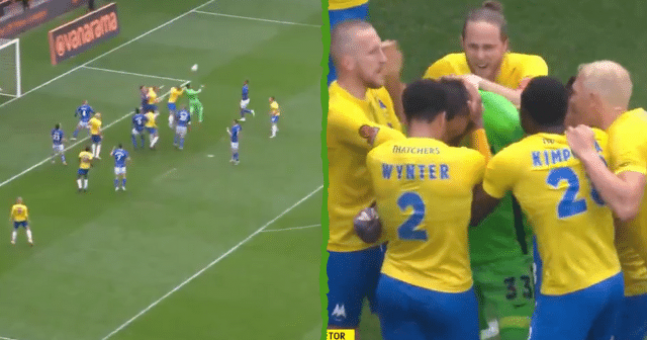 While the majority of football’s eyes are currently on the international stage, a number of domestic competitions are still ongoing.

This includes the Premier of the English Conference, where Torquay United faced Hartlepool in the play-off final at Ashton Gate Stadium in Bristol with a Football League berth at stake.

Torquay finished second in the division during the regular season, four points ahead of his opponents today.

However, Hartlepool would take the lead thanks to Luke Armstrong in the first half.

They managed to maintain this advantage for the vast majority of the contest despite increasing pressure from the opposition. Just when it looked like they were going to hang on, we were treated to a moment of pure drama.

Deep into the fifth minute of added time and with his team having a wide free kick, Torquay goalkeeper Lucas Covolan chose to make the long trip to Hartlepool’s penalty area.

You can probably guess what happened next.

Torquay has thrown absolutely everything and FINALLY gets his reward. 😱🔥

It is not finished ! 🤯 pic.twitter.com/zEWLSb7fTD

Incredible scenes, although it’s fair to say the cross should have been handled a lot better.

Remarkably, he was far from having finished making an impact. After extra time ended with a score of 1-1, Covolan saved Hartlepool’s first two shots on goal in the shootout.

Sadly, his teammates couldn’t capitalize on this start as they ultimately lost to sudden death.

Covolan has an interesting history. Originally from Brazil, he left the country after failing to make a career at the highest level.

He spent some time in Spain before a friend helped him organize a move to Whitehawk FC, which was playing in England’s Sixth Division. The goalkeeper would ultimately win a transfer to Torquay in the Premier Conference.

Of course, that goal will undoubtedly draw comparisons to compatriot Alisson Becker’s effort for Liverpool earlier this season.