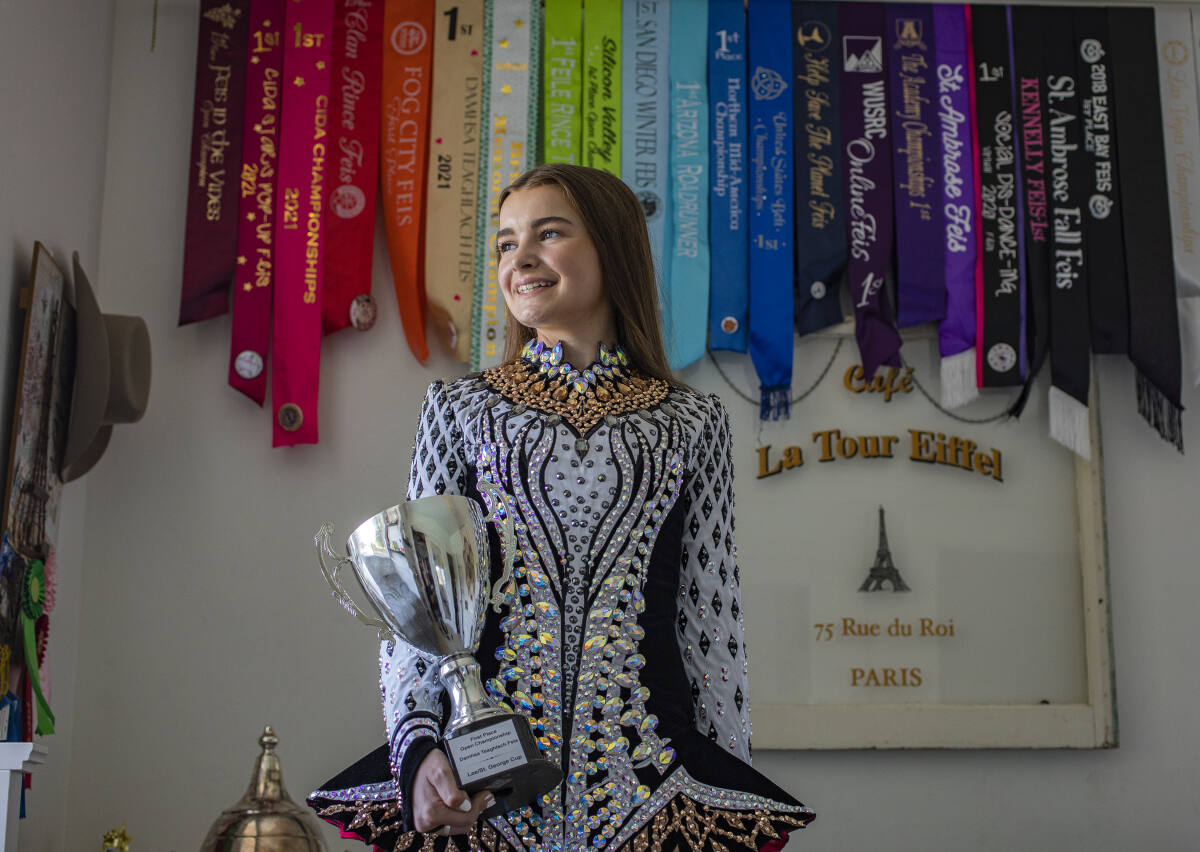 Thirteen-year-old Irish dancer Callan “Callie” Munselle tends to dance all over the place – in the kitchen, down the hall, in her bedroom and even during recess at school. For her, dancing has always been second nature and as natural as breathing.

Her mother, Kristen, often jokes “she came out of the womb dancing,” and her father, Bret, sometimes reminds her to “walk, not dance” down the hall.

When the Geyserville native was much younger, she and her older sister, Maddie, would repeatedly watch a “Riverdance” video of her grandparents and then try to copy their moves.

At the age of six, after watching the 2011 documentary ‘Jig’ about the world of Irish dancing and the World Irish Dancing Championships, she decided she was going to the World Championships in Ireland one day.

Munselle was already taking lessons in ballet, tap and jazz, as well as gymnastics and ice skating, when she expressed an interest in Irish dancing.

“I knew it was something I really wanted to try when I watched the videos,” she said, “Once I took my first class, I was hooked.”

When told she had to choose between ice skating and Irish dancing, she chose dancing without hesitation.

“I’m pretty sure my decision was based on the fact that I really wanted to wear one of the sparkly solo dresses,” she laughs, “but it’s been a great journey so far and I haven’t never looked back.”

Munselle was seven years old when she started her lessons at Keenan Irish Dance School in Petaluma. Maddie, his older sister, took the first lesson with her, but decided that she preferred football and basketball. One of her two younger sisters, Brynleigh, however, took lessons for almost a year.

It wasn’t long before she reached championship level and started competing both nationally and internationally.

She continued to train at Keenan until August 2020, when she moved to the Celtic Irish Dance Academy (CIDA) in Los Angeles, founded by instructor Maeve Coughlin, a member of the “Riverdance” stage production. during 10 years.

This decision required a big commitment, as it meant flying once a month and staying in Los Angeles for several days while taking in-person classes. For the rest of the month, Munselle’s training continued via Zoom.

“To make this remote learning work,” Coughlin said. “I knew a lot of things would have to be handed over to Callan to work from home. We were all very clear about expectations and she delivered in every way. She’s a super determined and hardworking girl with a maturity in her approach to learning that makes you forget she’s only 13.

Before the pandemic, the Munselles built a dance hall in their garage for their daughter to practice. A real dance floor has been added for the sonic feedback she provides to perfect her timing in her hard shoe dances.

“I researched how to build a floating floor and bought all the supplies,” her mother said. “My husband has done a great job putting it all together and it has worked really well for Callie. We had no idea at the time how critical this would be as the majority of her training now takes place at home.

Most of Munselle’s trophies are on display in the ballroom, but her favorites are kept in her bedroom, along with a wall of competition belts that she color-coordinated in rainbow order.

When she started competing at the age of seven, she was competing in maybe five or seven competitions each year. As she began to move up the ranks, that number grew to about two weekends a month.

She currently competes in around 30 competitions a year, which was much easier when she was in elementary school and when she was home schooled. Now that she’ll be taking high school classes in person, Munselle could compete less in other areas and stick to those closer to home.

In the past, she got her costumes from a few different designers based in Ireland. Her last two were designed by a couple in Southern California, where they fitted the dress for her and sewed it on the spot. Each robe lasts approximately one year before needing replacement.

As for shoes, she wears both “hard shoes” which look like tap shoes with fiberglass in the heel and toe, as well as “soft shoes”, also called ghillies, which look like to a soft ballet shoe, except with laces. She goes through a few pairs every year.