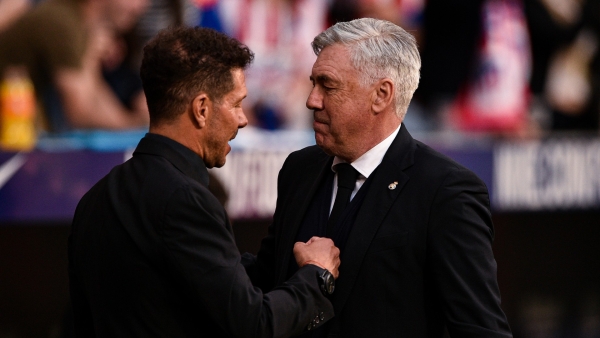 First-half goals from Rodrygo and Federico Valverde propelled Madrid to a sixth victory in as many league appearances this season.

Although Mario Hermoso pulled one back, before being sent off late for two bookings, Madrid were good value for victory at the Civitas Metropolitano.

Simeone praised Ancelotti’s work in his post-match press conference, praising Madrid’s defensive organization in a ‘low block’ and their efficiency on the break, comparing them to his Atletico side, winner of the title in 2013-14.

His comment claiming that critics accused the Atletico squad of being ‘defensive’ may have been interpreted by some as a backhanded compliment for Madrid, although Ancelotti decided against taking the view cynical.

“I think in the first half we did very well defensively at the start, then we were comfortable with the goals and in the second half we got rid of the idea of ​​doing damage” , said Ancelotti.

“It affected us because we suffered at the end. Atletico pushed us and created problems for us.

“Yes, we defended with a low block and got used to it. We warded off the danger of [Atletico] break up with [Antoine] Griezmann or Joao Felix. The low block allowed us to control them well.

“If Simeone says that we defended well in a low block, I say thank you to him, it’s a compliment.

“Ideal football is to score lots of goals and not concede, perfection does not exist.”

Both Madrid goalscorers have emerged as key players this season, taking on greater responsibility after previously being deployed more as rotation options.

Rodrygo started in place of the injured Karim Benzema in attack and effectively led the line, winning La Liga’s MVP award for the game, and Ancelotti was eager to congratulate him and Valverde.

“They are both very special players because they are what the modern footballer must be now, who must play in different positions, must have physicality, technique,” added Ancelotti.

“Both have improved a lot, and we are delighted because they are doing very well.”