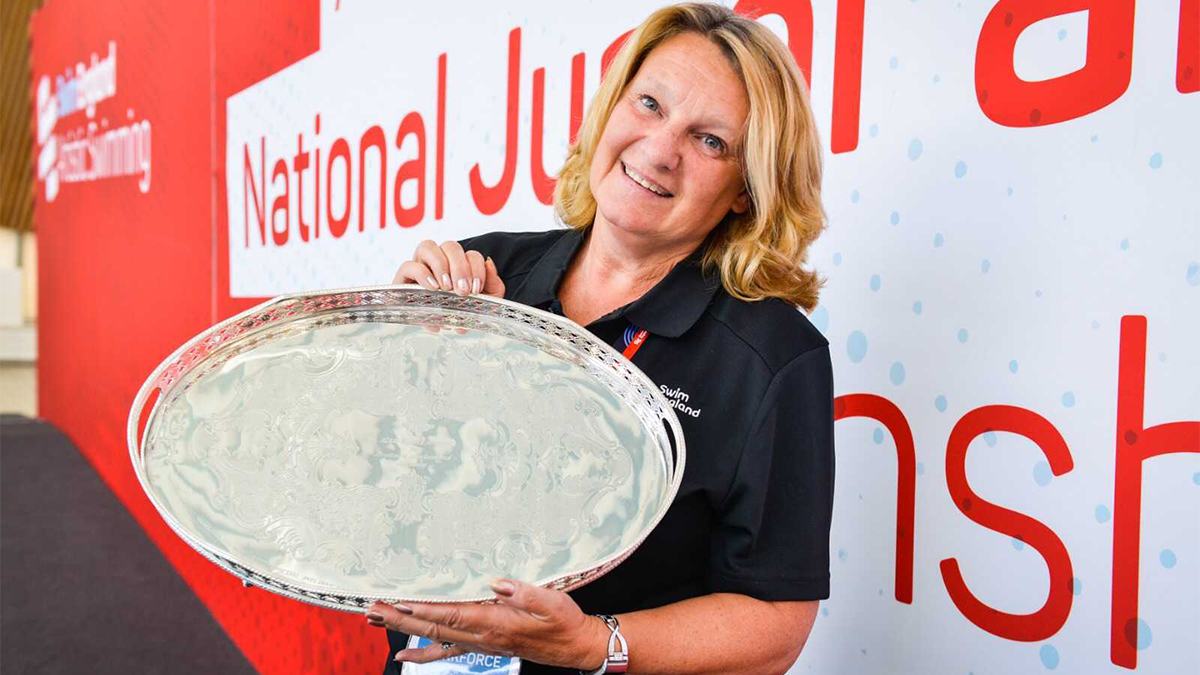 A “delighted” Phyllis McLean has been awarded the prestigious Mary Black Award for 2022 after a lifelong career in artistic swimming.

Swim England’s artistic swimming management team reviewed the nominations and were unanimous in their decision to award the trophy to Phyllis.

She received the award at the Junior and Senior Artistic Swimming National Championships and is a highly respected figure in the sport.

McLean, who was an international technical official at the London 2012 Olympics, began her sporting career as a competitor, winning a national title with her club.

After taking a break to raise a family, she then returned to the sport, helping to develop it in her region with roles at all levels of club, country and international.

During the pandemic, she has worked tirelessly to ensure good communication between clubs, with meetings, national Zoom training, competitions and virtual notes.

She has been described as a very dedicated and supportive person who is always willing to listen and take action to improve and develop the sport.

After receiving the award, Phyllis said, “I am absolutely thrilled to receive this prestigious award.

“It was a total surprise and an honor to receive this.”

“When I look at the names already engraved on the award, I can’t believe my name will be among those people I have worked with during my many years of artistic swimming.

“To win this at this time in my life is incredible and I’m so grateful to those who nominated me.”

The trophy is awarded annually to an individual who has provided outstanding service to artistic swimming and Phyllis was shocked to be named this year’s recipient.

She added: “I was working as a recorder at the event and was busy checking the data on the computer before the first team event.

“I was aware that some artistic swimming references were being read, but when Scotland was mentioned I started to absorb a bit more of what was being said!

“When I looked at my colleague and saw the huge smile on her face, I thought…this is me they’re talking about.”

Throughout her career in the sport, McLean has been involved in a number of events, but believes her role at the London Olympics was her personal highlight.

She said: “My personal achievement was being selected for the London 2012 Olympics as a technical official, it was a great honor for me and my family.”

“Helping Lauren Smith win Scotland’s first-ever artistic swimming medal at the Delhi 2010 Commonwealth Games was a very proud moment for all of us in Scottish Synchro,” she added.

Advice for those who want to get involved

Phyllis believes that anyone considering volunteering should do so, as it is rewarding and has made her feel special.

She said, “Go ahead! If you have a passion for sport and a desire to learn, help others and be part of a team, then put yourself forward.

“I really enjoy working with various clubs and helping them realize their potential and encouraging swimmers to achieve their goals.

“You will be rewarded when you see swimmers’ accomplishments and you will be part of something unique and special.”