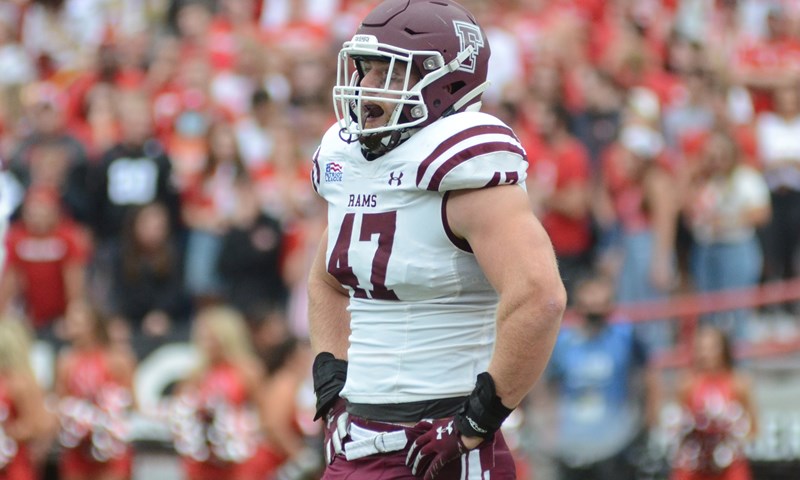 BETHLEHEM, Pennsylvania – Fordham grad student linebacker Ryan Greenhagen was named Patriot League Football Scholar-Athlete of the Year and was selected for the fourth time to the 15-member Academic League All-Patriot team when the honors were announced Wednesday.

Bucknell, Colgate and Holy Cross each received three All-Academic Team winners, while Fordham and Georgetown each placed two student-athletes on the team. Lafayette and Lehigh each had a winner.

*Greenhagen was a four-time All-Patriot League draft pick, earning First-Team recognition this season after finishing third in the league in tackles per game (9.4) and one of three players to eclipse 100 tackles this season.
* He is pursuing his Masters in Business Analytics with a cumulative GPA of 3.96. He graduated from Fordham last May with his bachelor’s degree in business administration with a GPA of 3.85.
* Sparta, NJ became Fordham’s career leader in tackles (414) and is currently fourth in Patriot League history, 12 shy of breaking the League’s career record.
* The two-time CoSIDA All-American is a finalist for the 2022 William V. Campbell Trophy, awarded annually to college football’s top student-athlete.

Ten team up academy for the first time

Patriot League Male and Female Scholar of the Year

ABOUT THE PATRIOT LEAGUE
The Patriots League is in its fourth decade of academic and athletic achievement, continually demonstrating that the student-athlete can excel both academically and athletically without sacrificing high standards. The Patriot League’s athletic success is achieved as its member institutions remain committed to its founding principle of admitting and graduating student-athletes who are academically representative of their class. Participation in athletics at Patriot League institutions is considered an important part of a well-rounded education.