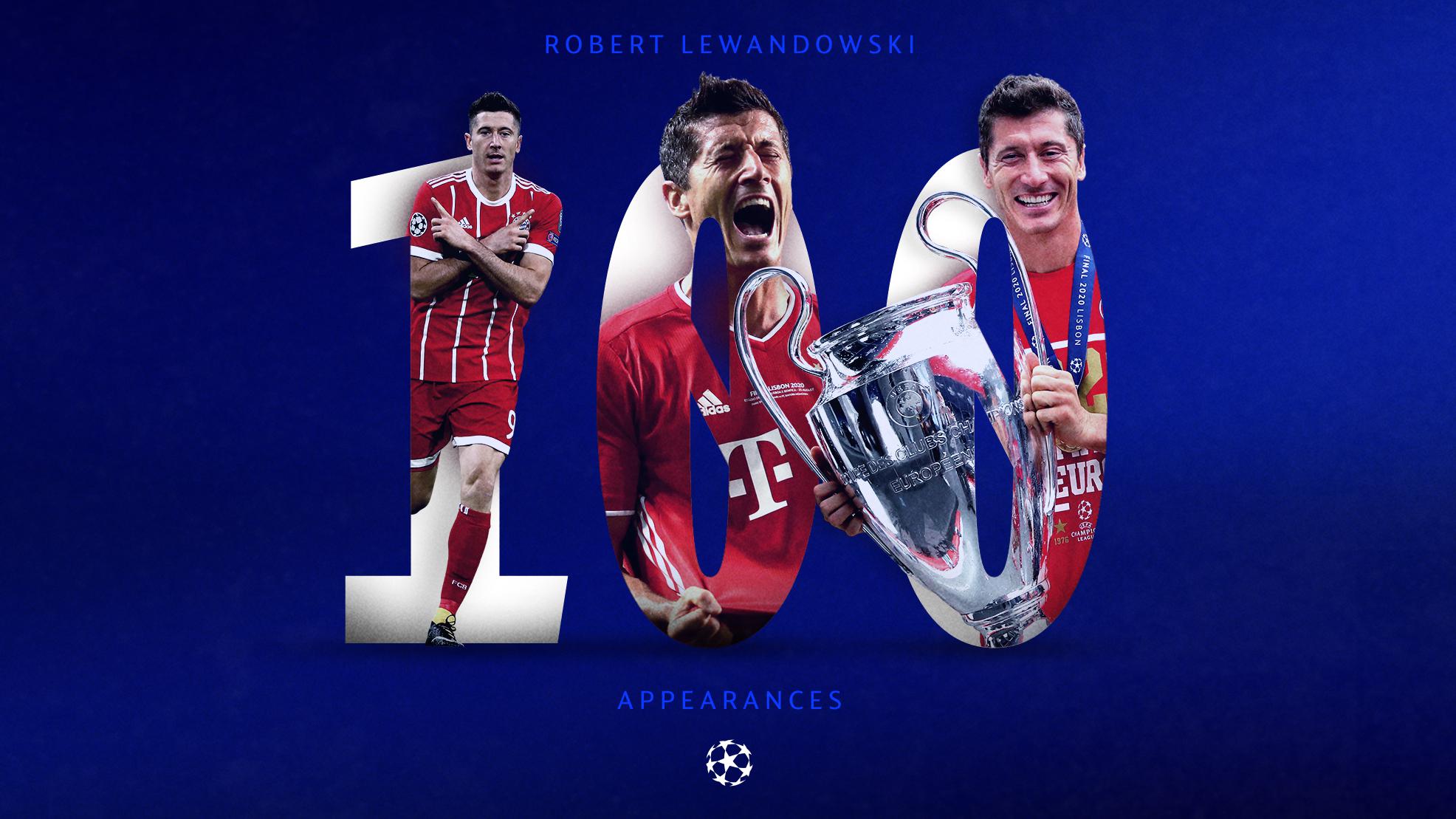 Robert Lewandowski reached another milestone on Tuesday as he made his 100th appearance in the UEFA Champions League. How could he celebrate other than with a hat-trick and an assist (we’ll forgive the missed penalty) in Bayern’s 5-2 win over Benfica.

The 33-year-old became the 42nd centurion of the competition, joining a group of players acclaimed for amassing 100 or more outings, led by frontman Cristiano Ronaldo. He further cemented his place at third in the UEFA Champions League all-time top scorers chart with 81 goals, reaching the 80-goal mark in record time.

UEFA.com sings the praises of the winner of the 2019/20 UEFA Champions League.

“He deserves the Ballon d’Or, and in my eyes he has to win the award because he has played incredibly consistently over the past three years like no one else.”
Julian Nagelsmann, Bayern coach

“He is extremely important because the quality that he has raises our level and you can see a country counting on him. He is still a very sensitive boy, he always wants to play. You can see everything he has achieved so far. ‘now. He needs discipline, ambition; he always needs to push himself to the limit. “
Paolo Sousa, Poland coach

“He is one of the most professional footballers I have ever worked with. He eats, sleeps and trains for his job. He is never injured because he is so focused on the right diet. and good preparation. “
Josep Guardiola, former Bayern Munich coach

“He’s one of the best, and maybe the best striker in the world. He scores goals in almost every game and of course I think he deserves to be on top and talk about it with [Messi and Ronaldo]. “
David Alaba, former Bayern defender

“I can only say the same thing: he’s amazing. He keeps scoring and he’s a machine. Right now he’s the best.”
Serge Gnabry, Bayern teammate

â€œOne of his finest qualities has always been his back to goal, protecting the ball. The fact that he has become a world-class striker is due to his work ethic in training and his ambition. . The way he motivates himself is amazing. “
JÃ¼rgen Klopp, former Borussia Dortmund coach

â€œHe was very thin, his legs were like sticks and I was always afraid that others would break them. I wanted him to be stronger physically and I even advised him to eat more bacon! a season where my team scored 158 goals; Robert got half of them. “
Krzysztof Sikorski, Lewandowski youth coach in Warsaw Warszawa

â€œIn the 70s Poland had Kazimierz Deyna, in the 80s Boniek, and now we have Lewandowski. The current success of our national team is due to teamwork, but every success needs a face, and that face is Robert Lewandowski. He’s absolutely world class. “
Zbigniew Boniek, former Polish striker and president of the Polish Football Association (PZPN)

â€¢ Scored the winning goal on his European debut as Lech PoznaÅ„ defeated XÃ¤zÃ¤r LÃ¤nkÃ¤ran 1-0 in a UEFA Cup qualifier on 17 July 2008.

â€¢ Became the first player to score four goals in a UEFA Champions League semi-final game as Dortmund beat Real Madrid 4-1 on April 24, 2013. The only other Pole to score a hat-trick against Les Merengues was Jan Urban, along with Osasuna. , in December 1990.

Bayern
â€¢ Set a world record scoring five goals in eight minutes and 59 seconds in a 5-1 win over Wolfsburg on September 22, 2015. His loot included the fastest Bundesliga treble (four minutes) and the biggest number of goals in the Bundesliga by a substitute (five).

â€¢ Scored 82 goals in his first 100 Bundesliga appearances for Bayern; the best stats for any new recruit in the history of the competition.

â€¢ With 286 goals, is by far the most prolific foreign goalscorer in Bundesliga history; he eclipsed Claudio Pizarro’s record of 195 in March 2019.

Robert Lewandowski with the Champions League trophyUEFA via Getty Images

â€¢ Reached 50 goals for 2019/20 with his double in the German Cup final: he finished the season as the top scorer in both domestic competitions after his third double with Bayern.

â€¢ The Bundesliga’s top scorer for four consecutive seasons, his total of 41 goals in 2020/21 has also crowned him top scorer in Europe’s five big domestic leagues.

â€¢ In September 2020, Lewandowski’s strike against Schalke helped him surpass Karl-Heinz Rummenigge’s Bundesliga tally of 162 goals for Bayern. With 212 he is just behind Gerd MÃ¼ller’s total of 365.

â€¢ Marked his 100th Champions League appearance as the fastest player to reach the 80-goal mark, compared to 102 for Lionel Messi and 116 for Ronaldo. He also brought his total to 64 European goals for Bayern, surpassing Gerd MÃ¼ller’s record of 62.

All Robert Lewandowski’s goals at EURO

â€¢ The Eagles’ all-time top scorer with 72 goals, he has a 24-goal cushion ahead of WÅ‚odzimierz LubaÅ„ski’s 48 goals.

â€¢ Is the most capped Polish player with 127 appearances. Jakub BÅ‚aszczykowski occupies second place in this ranking with 108 international outings.

â€¢ In an interview with UEFA.com, he admitted that training with his boxer dog had helped him recover from an injury earlier in his career.

â€¢ His physique turned heads in Dortmund, where he was nicknamed “The Body”.

â€¢ Dedicates his first goal for each club – and all important goals – to his father, Krzysztof, who died as a teenager; his celebration consists of pointing his two index fingers upwards.

â€¢ Lewandowski’s penalty against Leverkusen on August 18, 2017 was converted after the Bundesliga referee’s very first decision following a video review.

Lewandowski and his wife Anna at Oktoberfest 2019Getty Images

â€¢ Wife Anna Lewandowska is a karate champion and fitness expert, tabloids in Poland suggesting she is in charge of her husband’s diet and training regimes. In December 2016, Lewandowski announced that his wife was pregnant with a goal celebration against AtlÃ©tico. In May 2017, Anna gave birth to the first of their two daughters.

â€¢ Off the pitch he is involved in a company that builds apartments in and around Warsaw. In October 2017, he graduated in physical education from the Warsaw School of Sports Education. His diploma thesis was based on his own career and titled: “RL 9, path to glory”.

â€¢ To avoid being harassed when on the go, it has been claimed that Lewandowski asks friends to call him â€œEmilâ€.

“Is it hard to talk about my job? It’s the media’s job! I prefer to go home and focus on the next game instead. I try to disconnect and not too follow what people are doing. It’s more important to focus on training, working hard and putting my energy into the next game – how to score more goals, how to win, that’s what I’m trying to focus on.

“You must always believe in your abilities. I always know there will be chances.”

â€œInstinct is fine sometimes, but there are things you can work on in training. If you work hard and focus on the details, you might not even realize it. , but you start doing some things automatically during games. That’s the beauty of football. Even though my right foot is better than my left, I have to work hard on both. “

“When I was a very young player, six or eight years old, I admired Roberto Baggio. When I grew up a little, it was Alessandro Del Piero. And when I knew a little more, it was Thierry Henry. His movement, his technique and the way he kicked the ball and scored goals – it was great to see that as a kid. I learned a lot from him. “

What he could still accomplish

Lewandowski has had great success with DortmundÂ© Getty Images

â€¢ With 289 Bundesliga goals, Lewandowski is second in the standings all-time; his next goal is Gerd MÃ¼ller’s national record of 365.

â€¢ Reach second place in the UEFA Champions League top scorers rankings; he is currently third with 81 goals. A little ahead is a certain Messi, whose ever-increasing tally is 123.